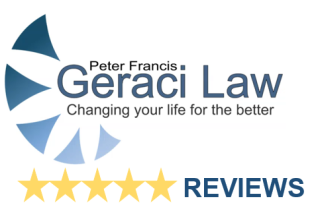 December 2, 2016: “Jonathan and Nick were so nice! This was so much easier than I ever thought it could be. The hardest part was walking through the door! I’m telling everyone I know who needs help about these guys!”

December 2, 2016: “I want to pass on that although filing bankruptcy, I was respected and treated friendly though-out the process. I would have no problem referring Erik M. Dickinson, Chad Garrapy and Geraci Law to anyone I know in the same position as were are in. I would like to add that with the way were treated my wife and I left with our dignity. Respectfully, W.M.”

December 1, 2016: “The service has been wonderful. From when I called to first start to now that we are almost done has been great. This was a big decision and not something that we planned on doing. We were treated with respect and not judged. I would recommend this law firm to anyone in need of this service.”

December 1, 2016: “Very nice experience. We were pleased with the way our case was handled and the way they made us feel. Very helpful and courteous. We would recommend to other people.”

November 29, 2016: “I spent many days and nights agonizing over how I was going to bounce back from the loss of childcare. The answer was Geraci Law Firm and the knowledgeable lawyer that helped me see that bankruptcy could be a good thing. It allows you to breathe while you recover… thank you Tarek M. Khalil, Attorney at Law.”