One of the worlds foremost jazz performers, Freddie Cole, performed Friday night at the University of Chicago performance all. Mr. Cole is a Juilliard trained pianist on vocalist, and is the youngest brother of Nat King Cole.

Peter Francis Geraci and his wife Holly Geraci were kindly invited by their dear friends George and Leslie Jackson, who attended with their extended family, and many friends as well as the regular subscribers to the concert program. It was a packed house. 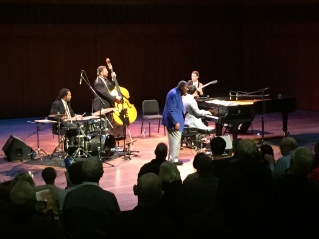 Mr. Cole was accompanied by guitar bass and drums, and they were fantastic especially the drummer; who would have been up to Nat King Cole standards, but what really stood out was Mr. Cole’s performance of Going Down Slowly.  The blues tune Mr. Geraci first heard when he was nine years old looking into the doorway of bars on 41st and calumet where he grew up. Has Mr. Cole said, every house should have at least one Freddie Cole CD in it!