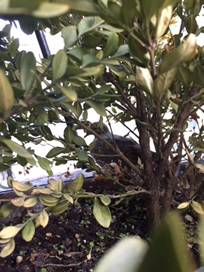 Anyway, there are no ravens in Chicago.  Only crows.   And crows eat other birds. Doves nest under the small bushes on our balcony window boxes. However, these skies of downtown Chicago are filled with Hawks, so the doves need to make sure they stay very still when they are nesting, and that they train their babies to fly very quickly, keeping them in the nest until they are large enough to fly away. We have not seen a Crow in downtown Chicago in 15 years.  But, just when t

he newborns, from a nest of doves, were about big enough to fly, guess who appeared?  The Crow.  And it is looking right at the doves’ nest.  The doves moved to the other side of the building. But, they did not move soon enough since there were two baby doves, now there is only one.  This is a pretty common problem, with crows and doves.